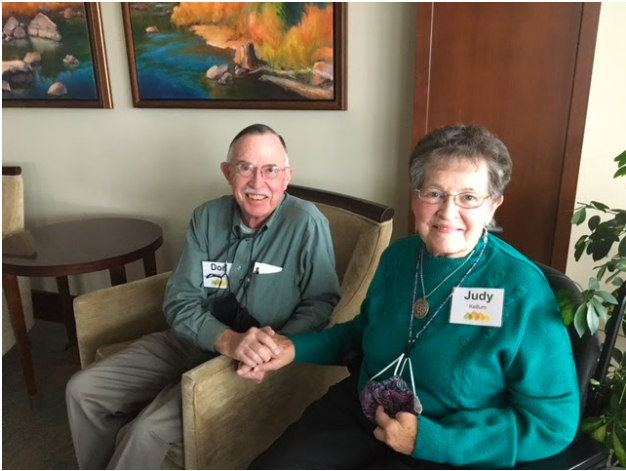 We are so excited to introduce Don and Judy Kellum, our first Cultivate Cameo Couple!

Don was born in Kansas, moving to Colorado at the age of 4, and Judy was 13 when her family moved from Ohio to Lakewood, CO. Don’s main interest during his school years was music, and he played in several bands and orchestras - marching in almost every holiday parade in Denver during high school. Along with his love of all things piano and clarinet, he enjoyed sports when time permitted. Judy was a typical teenage girl, with interests in extra-curricular activities, occasional school trips, and boys. Summers were spent at the local swimming pool and also attending baseball games with other girls to cheer on the aforementioned boys.

Don and Judy both attended CU, where Judy majored in physical therapy, and Don began his journey to become a medical doctor - eventually becoming an ophthalmologist (eye doctor). He worked at the Boulder Medical Center for 32 years and retired in 2004. Judy worked at the CU Medical School in her capacity as a P.T. while Don finished his general medical degree, and they were married in 1964 following a two-year engagement! Don’s additional training took them to Los Angeles, Spain (for a military assignment), Palo Alto, and eventually back to Boulder in 1972.

They have been blessed with four wonderful children (& equally wonderful spouses), 13 grandchildren, and 3 great-grandchildren, all of whom keep in close touch with each other. This family managed to connect for some very fun family reunions, every other year over 18 years until the grandchildren became old enough to occupy their summers with more “teenage-compatible” activities. These family members now live in Westminster, Spain, Indianapolis, Grand Rapids, Bangladesh, and Atlanta, but they still get together whenever they can work out the crazy logistics.

Don and Judy moved to Frasier in Boulder (or, as they occasionally call it, “The Old Folks Home”) five years ago. Judy previously worked as a physical therapist for 15 years at Frasier, and Don’s Mother lived there for 12 years during part of those years. So they knew where they wanted to be when the time came to make that change. Things they appreciate about Frasier include: making wonderful new friends; living a more simple lifestyle; the multitude of programs, concerts, and activities available all year long (with the obvious exception of 2020); eating in the lovely dining rooms and conversing with such interesting people, and the opportunities to interact with all age groups which keeps them young at heart.

Don and Judy have attended Grace Commons Church (formerly “First Pres of Boulder”) since 1972, so they have both socialized and served there in countless ways. Currently, Don volunteers to count the church offerings weekly (pre-COVID, of course), and joined a group of retired men, which calls itself “The Work Krew”. These men assist with church repairs and share good times of fellowship over coffee weekly. Don also enjoys playing golf, when possible, and is in several Bible study groups, which now meet via Zoom. Judy indulges her passion for creating note cards, and, until

COVID changed everything, for the past 4 years she was teaching card-making classes at Frasier twice a month. She also keeps busy creating cards that are sold in the Frasier Gift Shop and are regularly requested for use by family members.

They found a great need to investigate Cultivate's Carry-Out Caravan for food delivery once COVID made it difficult for residents of Frasier to venture off campus (almost a year ago now). This service has been a huge blessing for many reasons, but knowing their groceries will be delivered weekly by faithful servants who volunteer their time and energy have given Don and Judy additional security. And their children are most appreciative, too, since they know we have this reliable option. They are grateful for all the people who make this gift possible, and the timing of learning about

Cultivate and then utilizing this service, was perfect!