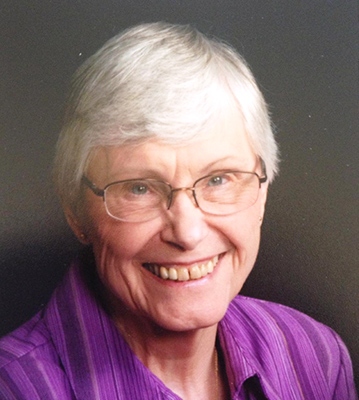 We would like to introduce Florene Prunty, this month's Client Cameo.  Florene was born in South Dakota and has two brothers and an identical twin sister, Florence, who is 10 minutes older than her.  Raised by her single mother after her parents divorced when she was 4 years old, they were quite the handful!  She and her twin look so much alike they are hard to tell apart; they would often switch places in class as well as double date and switch dates midway through undetected!  During World War II, their Girl Scout Troop was chosen to be trained as hospital aids, and they worked doing that for about a year when they were in their mid-teens.

Florene was introduced to her husband Ken in 1947 by her cousin and, in return, her cousin met his future wife through Ken.  They lived in GI housing at South Dakota State University after marriage in 1949 and had to live in a 19-foot trailer with no running water for a year (though Ken claimed he was always "running water" back and forth from the trailer). She says it was like living in a KOA campground.  Once her husband was out of college, they moved to Indiana so Ken could attend Seminary where he worked full time to receive a Masters of Divinity.  They also had their first daughter there.  Florene flourished as a pastor's wife and a mother of three.  They were always on the move with her husband's job as a Director of Christian Education.  They lived all throughout the Midwest including: South Dakota, Kansas, Missouri, Minnesota, and Indiana, before retiring in Colorado because Ken always wanted to live near the mountains, plus their daughter lives in Colorado.  While in Indiana, Florene worked for a surgeon for ten years and helped him start his practice from scratch. She did everything from his scheduling to billing to insurance claims and even typed the book that he published.  She worked in various accounting roles in offices most of her life with a 17-year gap when she was raising her three children.  Both she and her sister claim they received three degrees: an MRS (Missus), a MA (Ma), and a PhT (Pushing Hubby Through).

People would never guess that Florene and her sister are 92 years old.  Florene still lives independently and is very down-to-earth, funny, and sweet!  She was blessed to be married for 72 years before her husband's passing two years ago.  She still talks to her sister every day, and they see each other every year.  She has seven grandchildren and all three of her children have been with their loyal spouses for over 30 years, in part because having been raised by loving parents, they were wonderful role models.  Florene spends her spare time reading her Kindle, embroidering, and knitting.  She is quite an accomplished cross-stitcher and knitter, and she knits everything from argyle socks to scrubbies, which she loves to distribute to her friends and neighbors.

Florene has been a Carry-Out Caravan client in Broomfield for a year, now, and we have enjoyed getting to know her when she calls in to place her shopping orders.  We enjoy hearing her talk about making her stuffed peppers or a rhubarb pie.  She says that she has been very impressed with our service and that all of our volunteers, from the order takers to the shoppers and the delivery drivers, are so wonderful to talk with and she appreciates their efforts to ensure her order is correct.  In fact, her current delivery driver has adjusted her route to deliver to Florene last because she enjoys spending the extra time to converse with her every week.

Thank you, Florene, for being one of our loyal clients. We have enjoyed getting to know you and serving you!