We are so proud to introduce Tim Johnson as our outstanding Volunteer of the Month. For over seven years Tim has been very active helping with multiple Cultivate programs including YardBusters, VetsGo and Carry-Out Caravan. (And previously SnowBusters!)  Tim retired in 2021, after finishing his twenty six year career at Union Pacific Railroad as a systems analyst.  His team had a lot of success on the projects he worked on and led.  He is really proud of the work he did on that team and the way everyone enjoyed their time on the team.

Tim was born and raised in Cleveland, Ohio where he had a great childhood with a lot of fond memories of friends and family.  He worked at a neighborhood Burger King during high school as well as at a few Cleveland Indians and Browns games selling peanuts and popcorn.  He moved to Boston when he was 25, then to Colorado 5 years later and has been living here ever since.  He now feels like a Colorado native and could not imagine living anywhere else.  Tim loves the Colorado lifestyle and is very passionate about bicycle commuting and rides his bike whenever he can.  He currently owns three bikes.  It is not uncommon for Tim to ride his bike from Erie to Broomfield (weather permitting) to help shop for Carry-Out Caravan.  Tim also loves to read fiction and some poetry.  He is usually in the middle of one book or two.  His perfect day is walking with his wife to their favorite coffee shop, Fox and Dog in Erie, for coffee and the best scones in the world. Next would be a  bike ride with friends to a couple different breweries for some good craft beer, conversations and lunch. The night would end with a good book. A big thing on his bucket list is to bicycle through France, with one day on a Tour de France route where there is a field of sunflowers along the side of the road.

Tim is inspired by the possibilities that lie just around the corner.  He says you never know who you will meet, what you will read or where you will go that could have a wonderful impact on your life.  He tries to get out there and do new things and hopes he leaves behind a legacy that makes others smile.

The advice Tim would like to pass on to other generations are the following three things:  Show up, Work hard, and Be nice. Show up means not just being on time for work, it means being there for your friends and family, having them know they can count on you.   Work hard means when you have to do a task make sure when you finish it is something you are proud of.  Don't strive for mediocrity. Being nice is the hardest of the three. Sincerely take other people into account. Say thank you.  Be kind. Help others.

Tim volunteers because everyone needs help and he  believes we are put here on earth to help others and to try to make others happy.  One of our clients who's had a big impact on Tim is Maureen.  He has been helping her with yard work for five years.  He says that even though she has been battling cancer for the last two years,  no matter what she's going through, she is always a joy to be around.  She is witty, smart, fun, kind and interesting.  She never complains or gives up.  Never, never, never quit is a lesson he's learned from Maureen and is proud to pass along to others.

Thank you Tim; you are a true Cultivate rockstar! 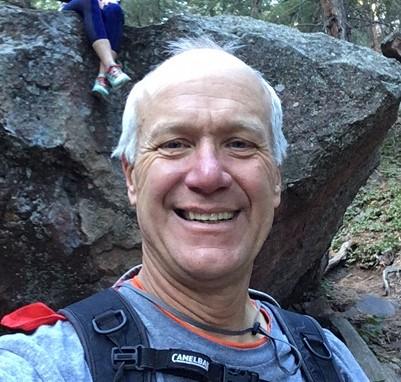 Our dedicated volunteers are crucial to the Cultivate family and living our mission of helping seniors flourish through active engagement with their community. Each month we will feature their stories in Volunteer of the Month. If you are interested or want to nominate someone else, please contact Cam Low at clow@cultivate.ngo