Volunteer of the Month: Terry Sheffer 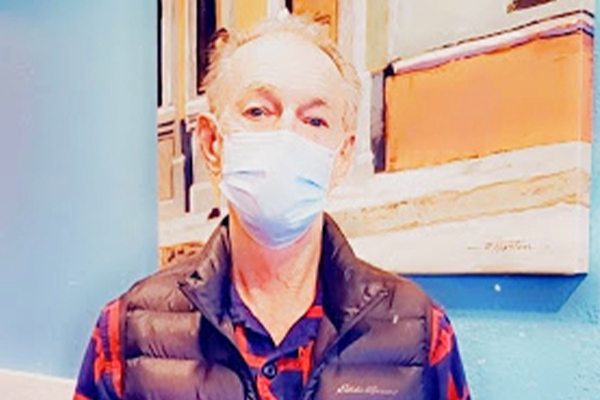 We are glad to introduce you to this month’s Volunteer of the Month, Terry Sheffer. Terry joined our volunteer family in December of 2019 and volunteers with both our Carry-Out Caravan and VetsGo programs.

Terry grew up in Oklahoma and Kansas City. As a child, his ambition was to become a diesel mechanic; he always liked tractors and all kinds of large trucks!  As Terry grew up, he learned to milk cows by hand, gather eggs, and many other different jobs around the farm, so that was technically his first job. Many years later, Terry got married and had children. “Being a father has not been easy,” Terry says. “Raising a family and having to be a bit strict, was not an easy job!” But it’s also one of his biggest accomplishments!

Some of Terry’s hobbies include riding his bicycle, playing golf, painting, and woodworking. A great day for Terry is waking up to beautiful sunshine, going on a bike ride, and relaxing by laying outside in one of his favorite spots.  Terry describes himself as a happy, friendly, and funny guy. He thinks others would also use those words to describe him and hopes that’s his legacy - happy, friendly, and funny!

Terry also loves to volunteer his time to give back to the community and is grateful that he has the good health to be able to volunteer. He recognizes that not everyone is so lucky to be in a position to help others in this way. Terry volunteers with Cultivate because he recognizes and appreciates the sacrifices many of our clients have made during their lifetimes, particularly the Veterans. He values the freedoms their service has given us all.

Terry’s advice to younger generations is to volunteer and help your community when you can. There is always someone who needs a helping hand. He recalls his parents teaching him to be respectful to everyone and to treat others the way you want to be treated, no matter who they are. He remembers his parents’ words every day and thanks them for being the person he is today.

And we thank Terry for his dedication to volunteerism and feel so fortunate that Cultivate and Terry found one another!

Ruby Zavala joined the Cultivate family three years ago as a Program Specialist, specializing in Carry-Out Caravan and Latino Outreach. Ruby is passionate about helping people and brightening the lives of others. When she is not working, she loves CrossFit, hiking, traveling, trying new foods, and being immersed in Colorado’s beautiful nature. Ruby is a lover of learning, aspiring to gain a deeper understanding of the world she lives in.

Our dedicated volunteers are crucial to the Cultivate family and living our mission of helping seniors flourish through active engagement with their community. Each month we will feature their stories in Volunteer of the Month. If you are interested or want to nominate someone else, please contact Ruby at rzavala@cultivate.ngo